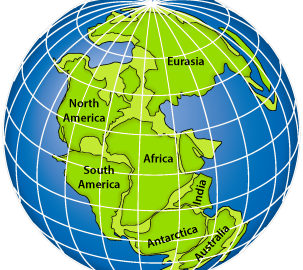 It is believed that when God Created the Earth, there was a Massive Continental Drift that formed all 7 The Continents .

On day 3 of the Creation , God made a split between the water and the Land .

Gen 1:9 And God said, Let the waters under the heaven be gathered together unto one place, and let the dry land appear: and it was so.
Gen 1:10 And God called the dry land Earth; and the gathering together of the waters called he Seas: and God saw that it was good.

This one Piece of Land God created was one solid piece of land that drifted in the lava ball , and later in Creation , split into the 7 Continents as we Know it today.

The 7 continents of the world are North America, South America, Antarctica, Europe, Asia, Africa and Australia. With the Middle Eastern Plate smack in the Middle.

The Positions of the Continents will change at the Battle of Armageddon, Where a Final Continental Drift will take place. scrambling as the Earth Falls over as the Earths Axle wobble reached its tip over Point .

The Earths Crust is made of Tectonic plates that drifts on top of a Lava ball . at the connections of the Tectonic Plates , openings called Volcanoes.

Tectonic plate. noun. the two sub-layers of the earth’s crust (lithosphere) that move, float, and sometimes fracture and whose interaction causes continental drift, earthquakes, volcanoes, mountains, and oceanic trenches. Plate size can vary greatly, from a few hundred to thousands of kilometers across; the Pacific and Antarctic Plates are among the largest. Plate thickness also varies greatly, ranging from less than 15 km for young oceanic lithosphere to about 200 km or more for ancient continental lithosphere (for example, the interior parts of North and South America).

What is the theory of continental drift?

In 1915, the German geologist and meteorologist Alfred Wegener first proposed the theory of continental drift, which states that parts of the Earth’s crust slowly drift atop a liquid core. The fossil record supports and gives credence to the theories of continental drift and plate tectonics.

This is not a Theory anymore , The Bible confirms that at the Battle of Armageddon and at the 2nd Coming of Jesus during the 7th Seal , 7th Trumpet and 7th Plaque of Gods Wrath , There will be a Massive Continental Drift back to forming one piece of land again on top of the Earth.

Jesus did say . Mat 24:7 For nation shall rise against nation, and kingdom against kingdom: and there shall be famines, and pestilences, and earthquakes, in divers places.
8 All these are the beginning of sorrows.

Rev 16:15 ~ 21 Behold, I come as a thief. Blessed is he that watcheth, and keepeth his garments, lest he walk naked, and they see his shame.
And he gathered them together into a place called in the Hebrew tongue Armageddon.
And the seventh angel poured out his vial into the air; and there came a great voice out of the temple of heaven, from the throne, saying, It is done.
And there were voices, and thunders, and lightnings; and there was a great earthquake, such as was not since men were upon the earth, so mighty an earthquake, and so great.
And the great city was divided into three parts, and the cities of the nations fell: and great Babylon came in remembrance before God, to give unto her the cup of the wine of the fierceness of his wrath.
And every island fled away, and the mountains were not found.
And there fell upon men a great hail out of heaven, every stone about the weight of a talent: and men blasphemed God because of the plague of the hail; for the plague thereof was exceeding great.

Since 2011 the Earths Axle Wobble has been increasing *see photo attach . The Movement of the wobble of the axle was recorded from the North Pole, and every year it increased causing Larger storms , New Volcanoes eruptions , Stronger and more Frequent Earthquakes , Longer Droughts and rainy seasons causing Massive Floods.

This will Increase yearly to a Point before the 2nd Coming of Jesus , were the Earth will fall over , and all the Continents will scramble to be on top . This will cause smaller Tectonic Plates to go under larger plates and big plates scramble over large plates . Some Continents will scrape over smaller continents and the smallest like the Australian Plate will go under the sea , with New Zealand and Australia disappearing under the water. As Revelation confirmed “And every island fled away, and the mountains were not found. ”

The 7 Continents will then again form one solid land mass , like it was before creation.

This then Comes to Mind ,

The Question of the Ages

How will every Eye behold Jesus at His 2nd Coming if the Earth is Round ?

Well all Continents will form one large land mass on the Top side of the Earth . with no land on the bottom half off earth ,

1Co 15:52 In a moment, in the twinkling of an eye, at the last trump: for the trumpet shall sound, and the dead shall be raised incorruptible, and we shall be changed.

Rev 1:7 Behold, he cometh with clouds; and every eye shall see him, and they also which pierced him: and all kindreds of the earth shall wail because of him. Even so, Amen.