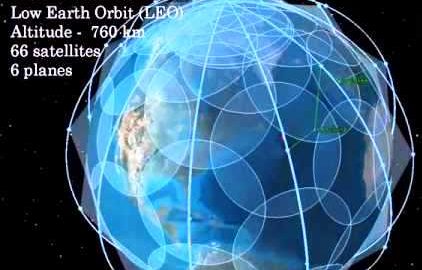 The 666 RFID Chip can soon be tracked all over the Earth including the North and South Pole with the help of the constellation of 66 active satellites has 6 orbital planes spaced 30° apart, with 11 satellites in each plane (not counting spares).

The rocket was carrying 10 satellites for the Iridium communications company.

The mission is called “Iridium 5” and is part of a larger aim to put a network of Iridium satellites into low orbit.

This is the logo for Elon Musk’s Dragon/Falcon projects which are responsible for launching the last few satellites for “One Web” the purpose of one web is to provide internet access for the entire world.

Rev 13:2 And the beast which I saw was like unto a leopard, and his feet were as the feet of a bear, and his mouth as the mouth of a lion: and the dragon gave him his power, and his seat, and great authority.

Designed and manufactured by SpaceX, Falcon 9 is used for transport of satellites into orbit.

The constellation consists of 66 active satellites in orbit, required for global coverage, and additional spare satellites to serve in case of failure.[3] Satellites are in low Earth orbit at a height of approximately 485 mi (781 km) and inclination of 86.4°. Orbital velocity of the satellites is approximately 17,000 mph (27,000 km/h). Satellites communicate with neighboring satellites via Ka band inter-satellite links. Each satellite can have 4 inter-satellite links: one each to neighbors fore and aft in the same orbital plane, and one each to satellites in neighboring planes to either side. The satellites orbit from pole to same pole with an orbital period of roughly 100 minutes. This design means that there is excellent satellite visibility and service coverage especially at the North and South poles. The over-the-pole orbital design produces “seams” where satellites in counter-rotating planes next to one another are traveling in opposite directions. Cross-seam inter-satellite link hand-offs would have to happen very rapidly and cope with large Doppler shifts; therefore, Iridium supports inter-satellite links only between satellites orbiting in the same direction. The constellation of 66 active satellites has 6 orbital planes spaced 30° apart, with 11 satellites in each plane (not counting spares). The original concept was to have 77 satellites, which is where the name Iridium came from, being the element with the atomic number 77 and the satellites evoking the Bohr model image of electrons orbiting around the Earth as its nucleus. This reduced set of 6 planes is sufficient to cover the entire Earth surface at every moment.

JESUS IS COMING SOON ! ARE YOU READY ?