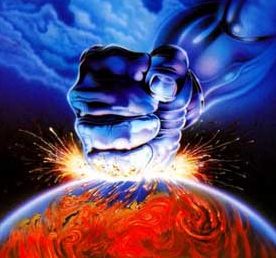 This is not the same Wrath and happens one after the Other.

Rev 9:1 ~ 5 And the fifth angel sounded, and I saw a star fall from heaven unto the earth: and to him was given the key of the bottomless pit.
And he opened the bottomless pit; and there arose a smoke out of the pit, as the smoke of a great furnace; and the sun and the air were darkened by reason of the smoke of the pit.
And there came out of the smoke locusts upon the earth: and unto them was given power, as the scorpions of the earth have power.
And it was commanded them that they should not hurt the grass of the earth, neither any green thing, neither any tree; but only those men which have not the seal of God in their foreheads.
And to them it was given that they should not kill them, but that they should be tormented five months: and their torment was as the torment of a scorpion, when he striketh a man.

Then the 5th Trumpets sounds and a Super Volcano Erupts on Earth . It looks like the Yellowstone Super Volcano and this will effect half of the earth for a period of 5 Mounts. The Volcano dust will cover more than half of the Earth for this time period blocking out the Sun and the Lava from this Volcano will wipe out Mystery Babylon.

The 7 Plaques of God’s Wrath is poured out over the Earth as it is recorded in Rev 16.

Then the 6th Trumpet War breaks out for the Last Food , water and Oil resources on Earth.

Then 7 Thunders takes place where God speaks to everybody on earth with a Loud Voice addressing the 7 Carnal Sins.

Then the 2nd Coming of Jesus Christ take place and the Rapture.

Mat 24:29 ~ 31 Immediately after the tribulation of those days shall the sun be darkened, and the moon shall not give her light, and the stars shall fall from heaven, and the powers of the heavens shall be shaken:
And then shall appear the sign of the Son of man in heaven: and then shall all the tribes of the earth mourn, and they shall see the Son of man coming in the clouds of heaven with power and great glory.
And he shall send his angels with a great sound of a trumpet, and they shall gather together his elect from the four winds, from one end of heaven to the other.

1Th 4:13 ~ 17 But I would not have you to be ignorant, brethren, concerning them which are asleep, that ye sorrow not, even as others which have no hope.
For if we believe that Jesus died and rose again, even so them also which sleep in Jesus will God bring with him.
For this we say unto you by the word of the Lord, that we which are alive and remain unto the coming of the Lord shall not prevent them which are asleep.
For the Lord himself shall descend from heaven with a shout, with the voice of the archangel, and with the trump of God: and the dead in Christ shall rise first:
Then we which are alive and remain shall be caught up together with them in the clouds, to meet the Lord in the air: and so shall we ever be with the Lord.

7th Plaque , after The 2nd Coming of Jesus and the Rapture of the Elect , The Battle of Armageddon takes place.

As soon as we met Jesus in the Air during the Rapture, we continue upwards to Heaven , and as Jesus goes down to attend to the Battle of Armageddon, as He steps foot on the Mount of Olives , The Earth Stops Spinning / Rotation from 1000 miles per hour to 0 Miles per hour in one second , Causing havoc on Earth , read more about the Wrath of the Lamb in this Article by click on the Earth .

EARTH STOP SPINNING AT THE 2ND COMING OF JESUS

Where are the Christians during the Wrath of God ?

We are on the Earth , Just after the Marking of the Ones that did not take the Mark of the Beast and the Marking of the 144 000 Jews with the same seal of God , all of us Go into Angel Protection , This is where Psalm 91 comes in, Rev 16 is what Happens with the Unsaved and Psalm 91 is what happens with the Saved during the Wrath of God , and The Elect of Christ is removed from the Earth before the Wrath of the Lamb kicks in called the Rapture

Rev 16:15 Behold, I come as a thief. Blessed is he that watcheth, and keepeth his garments, lest he walk naked, and they see his shame.
Rev 16:16 And he gathered them together into a place called in the Hebrew tongue Armageddon.